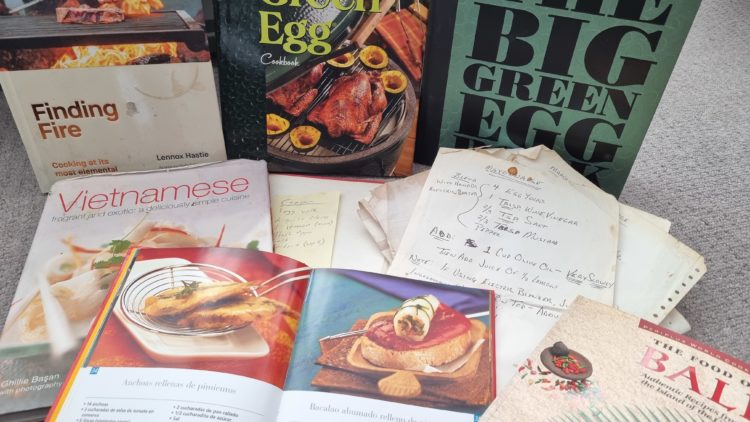 Cookbooks have always been one of my great joys in life.  Having opened the family restaurant the same year I was born, to say I grew up around food would be a little of an understatement.  My school used to do a book fair every few months where you got to pick a free book.  I was already a passionate foodie, but I was also going to be the next David Copperfield (David Blaine and Dynamo weren’t around yet!), so I would alternate, each book fair, between taking a magic book or a cookbook.  I can still remember making my first recipe for the family, a fruit ambrosia.  It was just chopping up fruit, sticking it in a bowl and sprinkling some dessicated coconut over it, but it looked just like the picture in the book and I remember how proud that made me feel.  I got more adventurous and my next recipe for the family was a lemon chicken piccata.  This was a whole different level of complexity, with beating out chicken breasts to an even width, breadcrumbing, frying, making a sauce and sides.  It was proper cooking and, once again, it looked just like the picture! My parents said they loved it.  They probably didn’t, but my trusty cookbook was allowing me to cook for professional chefs and not make a fool of myself! My magic shows, on the other hand, were not receiving such positive reviews, so from that point on, I was hooked on cooking.

Though my child’s cookbook has long since left my collection, having experienced one too many spills or kitchen fires, I now own over 100 recipe books and refer to them all the time. I don’t really tend to ever use a recipe as it is, unless I know it’s 100% spot on or such an iconic dish that I dare not play around with it.  I prefer to look at maybe 3 different recipes for a similar dish, then work out which bits I like most from each one before coming up with my own version.  That probably explains why I’m rubbish at the more precise aspects of cooking, like baking!

Cookbooks That Are Dear To My Heart

There are a number of cookbooks that are very near and dear to my heart which I do go back to time and time again.  This is usually either down to nostalgia or uniqueness.   I have two books that kind of represent my roots, The Texas Cowboy Kitchen by Grady Spears and Paul Prudhomme’s Louisiana Kitchen.  I was a French boy that grew up in Texas with a strong family link to New Orleans, so these two books kept some of that American food culture alive for me.  Though BBQ has hit big in the last 10 years in the UK, it was virtually non-existent when I arrived here in 1997 and Cajun Food has still barely even scratched the surface here.  If the queues at Popeyes Fried Chicken in Westfield or the reviews on new Cajun efforts, like Claw & Hammer are anything to go by, then these two cuisines still have a lot of mileage left before they peak in the UK.  I still can’t help myself from at least an annual guilty pleasure of chicken fried steak with biscuits and gravy or the ultimate peasant food experience that is, a well-executed gumbo.

As any good Texan should be, I’m an absolute barbecue nerd and am always experimenting with cooking over fire or on my Big Green Egg.  As everyone Texas will testify, achieving the perfect brisket is a lifelong challenge and I don’t think any of us are ever actually satisfied 100%, always looking for the next minor adjustment to make for that perfect bark, smoke ring, or perfectly moist meat.  I’m working through Finding Fire by Lennox Hastie at the moment, which kind of takes cave man cooking to a Michelin starred level.  I have to admit, this one is a little out of my comfort zone at present, but I’ll get there eventually. I just need to find a friendly neighbourhood lumber jack to help me source all the exotic woods Lennox likes to use!

When I first moved to the UK, the food scene hadn’t exploded into the amazing, multicultural melting pot that it is now.  Jamie Oliver was still a couple of years away from launching The Naked Chef, which is when things really started to get cool.  The first British chef I became a fan of was Gary Rhodes and I must have cooked every recipe in his New British Classics twice! Gary was one of those chefs that always could take the simple and make it sublime.  He was way ahead of the curve with that book and it took the rest of the country 15 years to catch up and start realising that Scotch Eggs and Sausage Rolls didn’t have to be rubbish sides bought from the supermarket as fillers, but could take centre stage at any meal, if done right.

One of the reasons I chose the company I worked for was because he was affiliated with them and I just wanted to meet him.  That year, every member of my family got an autographed copy of that book, personally signed from Gary himself.  They may not ever use it, or even appreciate it the way I did, but I still go back to that book when I need something to deliver that fine balance between having the WOW factor, but still being unpretentious.  I still remember him as having the best mashed potato I have ever eaten, anywhere in the world.

My wife, Leigh-ann, and I have a little tradition of taking a local cooking lesson or at least a food tour, when we travel and we always try to get a cookbook from each new country we visit.  We then cook a meal from that country as a thank you for whomever has had the misfortune of looking after our dogs.  It makes the holiday last a little longer, lets us share the experience in a more tangible way, and lets us recognise the areas where culture and food relate.

I have books from cookery classes in Bali, Cambodia, Malaysia and Thailand.  I absolutely love a book called Vietnamese, Fragrant and Exotic; A deliciously simple cuisine by Ghillie Basan.  This is another book where we’ve just about cooked every recipe and then started over again.  I have a Spanish Tapas book that Wendy Bartlett gave me when I visited her in Sotogrande with 100 recipes, but it’s all written in Spanish, which I do not speak.  It was probably Wendy’s attempt to challenge me to learn Spanish. I didn’t!  The photos are beautiful and the dishes are amazing. I have to spend a lot of time on Google translate but it is always well worth it.  When Leigh-ann and I eat food from our travels, it transports us back to those amazing countries and memories, creating what we call “the food buzz”, a feeling of euphoria that I find only nostalgic food experiences can create. Virtually nothing puts me in a better mood.

The final cookbook of note is my decoy, which I can’t name.  It’s a cookbook, but not one that I ever use for its own recipes.  It hides my dad’s very old, very stained and very faded handwritten recipes from the restaurant we had for 30 years back in Texas.  These date back to the 70s and, believe me, opening the first French restaurant in Lubbock Texas, in the 70s, was challenging enough, let alone researching recipes before the internet, and sourcing ingredients.  The recipes are like little family treasures.  My dad was self-taught, so cookbooks were everything to him and I know some of the books he leaned on at the time were Mastering the Art of French Cooking with Julia Childs, which my sister ended up with, and the Larousse Gastronomique, which I ended up with.  I love how books and recipes get handed down over the generations helping preserve culture and tradition, which food is an integral part of.

I don’t have children, but I spent the first year of lockdown giving a real time cookery lesson every other week via Zoom, then a virtual dinner party with my nephew-in-law. I’d send him the ingredients list in advance, we’d log on and I’d have him shadow me on every step of preparation. We would then sit down with our wives, in front of our laptops, and pretend we were in the same room. He went from never having really cooked a full meal to being able to prepare a full tapas menu or a perfectly executed beef Wellington.  From Julia Childs, to my Dad, to me, then to Craig, these dishes have moved through our family, often picking up a little change due to better or worse access to ingredients, equipment and skill.  I’d love to see how those recipes look after 2 more generations of change, when his grandchildren are first trying them out.  Your turn Craig!