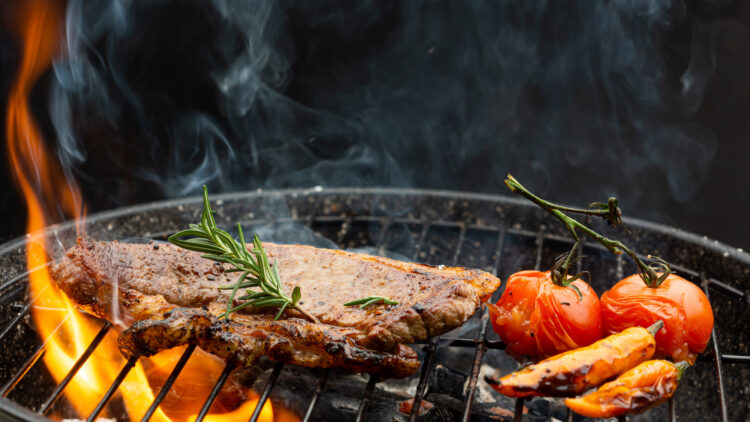 Cooking on barbecues and outside has really taken off in this country over the last 5 years or more. So much so that it’s happening in places that you would not have expected to see it before, so many Michelin starred restaurants have a kamado or Japanese BBQ in their kitchens. Most of the time you might not even know that the dish you’re eating has been finished on one; menus don’t even often mention it any more as it can sometimes be used just to add a subtle flavour or texture to finish a dish.

Last year Niklas Ekstedt brought his Swedish restaurant Ekstedt to London in the Great Scotland Yard hotel. His one star restaurant in Stockholm only cooks with wood or coal, so much so that the actual kitchen has no mains power. I was lucky enough to be able to go to Stockholm a few years ago and his place introduced me to the Flambadou. This turned into another piece of kitchen equipment that I had to have. It turns out that they are not as easy to buy in the UK and we had to get one imported from France. Good old ebay! His book, Ekstedt, is one that I would recommend if you want to do something different with your barbecue. The restaurant is definitely worth a visit as well, although you may find London easier to get to than Stockholm!

SY23 is another ‘fire-led’ restaurant that is proving very popular at the moment. Chef Nathan Davies was on Great British Menu this year with his homemade grilling contraptions, which you noticed as the week went on were getting used by more and more of the other chefs in the kitchen.  I recently enjoyed a ‘bottomless ribs’ Monday at Sophie’s in Soho, where they have a really impressive hanging grill which can be raised or lowered over the flames.  And it wouldn’t be right not to give a mention to one of our own, Darren Collier, who is running his own restaurant SpitJack on the other side of the world Down Under. As Darren (and only Darren would) says, everything he does is ‘licked by fire’. Check him out at SpitJack

Some other books I would recommend for something a bit different from the normal barbecue fare would be:

One thing I have learnt over the last few years when cooking outside is the importance of the quality of the coal. Getting a ‘restaurant-grade’ product makes such a difference as it comes as larger pieces of lump wood. Japanese White Charcoal (Binchoian) is excellent, it takes a long time to get up to high heat but burns for much longer than other coal. I tend to mix it with some other coals to get it going a bit quicker.  If you are cooking burgers and sausages then regular charcoal is ok but if you are using premium ingredients and want the best possible results and flavour then try to avoid something that has been sitting on a petrol station forecourt gathering moisture and fumes!

My outdoor set-up at home includes

A Big Green Egg barbecue which is super versatile.  Because you can control the air you can use it as a conventional oven in addition to smoking and barbecuing.  I also have a wood-burning oven, mainly for pizzas but I have also used it to bake bread, flavour meat dishes and bake a paella. I even cooked a turbot dish in it recently which came out really well, it is worth looking on YouTube for ideas to get creative.

My most recent addition is a Japanese Konro grill which has been great fun to experiment with.  They are particularly good if you don’t have a lot of space and can be very reasonably priced.  Worth noting though, it is not aimed at slow cooking by any means but in terms of adding flavour it is the best I have used.  When I do want to slow things down a bit I use a pan on top of the grill, especially if I am using some of my other toys at the same time. You may have seen James Martin do this on a Saturday morning; I did it first!

It does take a while to learn how to cook well over flame but it is great fun trying and a bit of burnt ends never hurt anybody.  Just keep playing around until you are happy with your results, or if you are anything like me even then just change it up anyway to see what else can be achieved.

On of my favourite dishes to make outside is this Lamb chops with Tara Dal, easy to make it’s bound to be a winner with the whole family and make sure to stay tuned-in to BM’s TikTok where Pete will soon be showing you some tricks and hacks in his own inimitable style.

How to get Waste-Ed at work

Stirring Memories from my Favourite Cookbooks