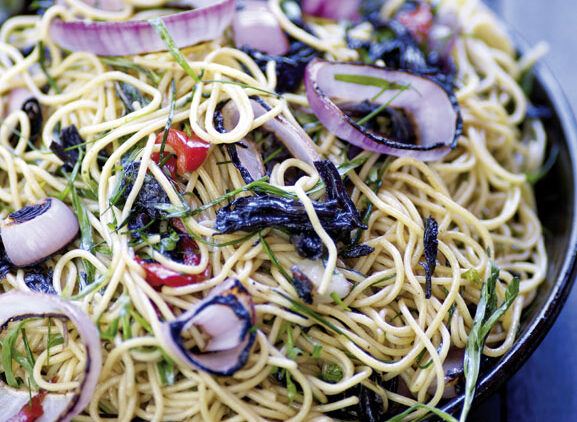 Burn the peppers over an open flame or under the grill until charred on all sides. Place the peppers in a bowl, cover the bowl tightly with cling film and leave to cool. Peel the skin off the peppers and slice the flesh into strips, discarding the cores and seeds. Peel the onions and slice them into thick rings, then cook them on the grid of a hot barbecue (or in a frying pan over a high heat on top of the stove) until they are slightly soft and caramelised but still have ample texture to stand up in the salad. This will take 12-15 minutes. Remove the onion from the heat and keep them warm. Fill the sink with slightly tepid water, drop in the mushrooms and spin them around for a minute. Remove and drain in a colander placed over a bowl, then spread them out on a tea towel to dry them out slightly. Pick over the mushrooms, pulling off and discarding any stalks that are dirty. Fry the mushrooms in a splash of olive oil over a high heat until they dry out and begin to crisp up. Season lightly with salt and pepper, then leave to drain on paper towels until you are ready to bring the salad together. Cook the noodles in boiling salted water according to packet instructions. Drain and refresh under cold running water, then place in a large serving bowl. Pick the leaves from the tarragon, chervil and basil (the stalks can be reserved for stocks and marinades); cut the chive stems into three with scissors. Dealing with the herbs will take some time, but they will give the dish its flavour.

Take a frying pan that is large and wide enough to hold all the pepper slices spread flat in a single layer. Place the pan over a high heat, pour in a large glug of olive oil and heat until very hot. Spread the peppers out in the pan and fry them until they begin to caramelise, which will take about 5 minutes. Add the sugar and season with salt, stir and watch carefully until the peppers caramelise all over (this should take another 5 minutes), adding the vinegar before they colour too much. Reduce the vinegar for 1 minute, remove the pan from the heat and allow the peppers to cool slightly. Just before serving, add the herbs to the bowl of noodles with the peppers and their juices. Separate the slightly cooled onions into individual rings and add these to the salad, then season with salt, pepper and olive oil and mix thoroughly.