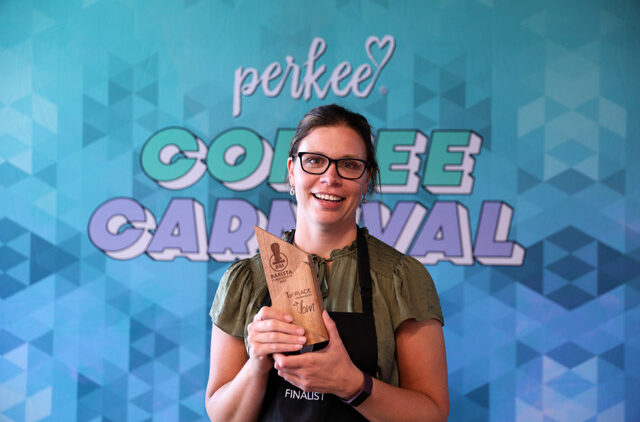 Natasha Boshoff was crowned winner of BM’s barista championship on Friday night (29 July), which saw the return of the annual company competition for the first time following the pandemic.

Natasha works as an operations manager who looks after a number of BM sites across the south-east won not only a visit to BM’s partner roastery in Denmark but a Sage espresso machine for their home. She was especially commended for the close attention she paid to the taste profiles of her drinks.

Six finalists – five by score and one ‘wild card’ drawn from a hat – battled it out at Brentford Community stadium and were tasked with delivering 12 drinks in 15 minutes.

Competitors had already gone through two phases prior to the final. In the first, they had to make four beverages in seven minutes: two single espressos and two single shot-based milk beverages, focusing on the provenance and recipe of their espresso.

The second round was a step up with the addition of two single shot-based signature drinks, totalling six beverages in 10 minutes.

The annual event, launched in 2018, celebrated Perkee, BM’s own premium coffee brand, as well as its other coffee partnerships. 17 of BM’s suppliers attended the event, helping raise money to go towards the host’s supporting charity.

Natasha said: “I can’t actually believe it. It has been an incredible experience and brilliant for all of us to get together and learn. I’ve picked up so much knowledge just by being part of this process so I’d always urge people to get involved in things like this. For me, it’s all about learning and I’m grateful that this is something that is so important to BM.”

Miguel Camara, Head of Coffee & Tea from BM said: “It’s incredible to be able to get back to these events after recent difficult times. The most astonishing thing to me was the quality and the calibre of the competitors this year. Our coffee is in good hands.”

BM developed Perkee in collaboration with Nicaraguan-based co-operative Soppexcca in 2016. The coop is run democratically and promotes gender equality and women’s empowerment. It produces own organic fertiliser using coffee cherry pulp and animal waste and members are developing systems to recycle the water they use during the bean-washing process.